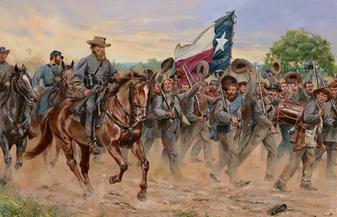 The Texas Brigade was organized on October 22, 1861, primarily through the efforts of John Allen Wilcox, afterward a member of congress from Texas, who remained as the brigade's political patron until his death in 1864. The brigade was initially and briefly under the command of Louis T. Wigfall until he took a seat in the Confederate Senate. Command was then given to John Bell Hood (hence the Texas Brigade was often known as "Hood's Brigade" or "Hood's Texas Brigade"). The brigade left Texas and many men had almost no weapons at all. Others took whatever was available; this resulted in soldiers carrying almost anything that would shoot—shotguns, hunting rifles, pistols, old flintlock muskets used in the Texas Revolution, model 1841 Mississippi rifles, Colt revolving rifles, and more. At least two companies are reported to have carried model 1855 Springfield rifles, which would have been the only modern weapons in the brigade. The Texans have held in high regard thanks to the legends of the Seige of the Alamo, and The Battle of San Jacinto and the Confederate government made sure that they got the best equipment available. Most of the brigade was soon issued Enfield rifles aside from the 1st Texas Infantry, which had mostly smoothbore muskets and appear to have still been using them well into 1864.

Wigfall resigned command of the brigade on February 20, 1862, and on March 2, Hood was promoted to brigadier general and placed in command. Because of his daring leadership, the brigade became known as Hood's Texas Brigade, despite his brief service of only six months as commander. The brigade served throughout the war in Robert E. Lee's Army of Northern Virginia and in James Longstreet's First Corps. It participated in at least twenty-four battles in 1862, including Eltham's Landing, Gaines' Mill, Second Manassas, and Sharpsburg (Antietam). In October the Third Arkansas regiment replaced the Eighteenth Georgia and Hampton's Legion. On November 1, 1862, Brig. Gen. Jerome B. Robertson became brigade commander, and Hood was elevated to command of the division in which the Texas Brigade operated.

In April 1863 the brigade moved to North Carolina; in May it rejoined Lee's army; and on July 1, 2, and 3, it took part in the battle of Gettysburg. In Georgia the brigade fought on September 19 and 20 at Chickamauga, where Hood was wounded and forced to leave his division, ending his official connection with the brigade. In Tennessee, the brigade joined in the sieges of Chattanooga and Knoxville. Gen. John Gregg became commander when the brigade returned to Virginia in February 1864. In the Battle of the Wilderness of May 5th 1864, General Robert E. Lee personally led the Texans in one of the charges. During the battle, General Lee was nearly pulled off his horse by several members of the brigade in fear of his life as he was to the front end and pushed to the rear. As a result, several companies shouted "Lee to the rear!" as he fell back.

General Lee received a small package from an unknown “young lady of Texas” in January 1865 which contained the nine gold stars. The young lady had the gold stars made after melting down one of her precious gold keepsakes, and she wished that they be bestowed as testimonials to the bravest men of the Texas Brigade. In his letter to Col. F. S. Bass, Lee requested that the brigade commander present the stars for he could “with more certainty than any other, bestow them in accordance with the wishes of the donor.” Therefore, it was decided that the recipients of the gold star awards would be selected by their fellow soldiers. Each regiment received two stars, except for the Fourth Texas, which received three.

After Gregg was killed in October the brigade was temporarily led by Col. Clinton M. Winkler and Col. F. S. Bass. At the surrender at Appomattox on April 10, 1865, Col. Robert M. Powell commanded the brigade, Capt. W. T. Hill the Fifth regiment, Lt. Col. C. M. Winkler the Fourth, Col. F. S. Bass the First, and Lt. Col. R. S. Taylor the Third Arkansas. It is estimated that at the beginning of the war the Texas regiments comprised about 3,500 men and that during the war recruits increased the number to almost 4,400. The brigade sustained a 61 percent casualty rate and, at its surrender, numbered close to 600 officers and men. It was praised by generals Thomas J. (Stonewall) Jackson, James Longstreet, and Robert E. Lee and by high officials of the Confederacy. 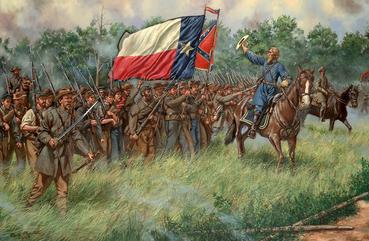 Originally and simply known as the "Texas Brigade", was an infantry division of the Confederate States Army. Along with the Stonewall Brigade, Hood's Texas Brigade was distinguished as General Rober E. Lee's shock troops. The unit fought in every major battle of the Eastern Theater except Chancellorsville. When the unit left Texas and marched to join Lee's Army, they brought with them the Texas folk songs as their marching cadiances. The most famous of them was the song "Yellow Rose of Texas".

"The enemy never sees the backs of my Texans!"

-General Robert E. Lee: The Battle of the Wilderness, 1864

"I can assure you, that the gallant hearts that throb beneath its sacred folds, will only be content when their glorious banner is planted first and foremost in the coming struggle for independence." 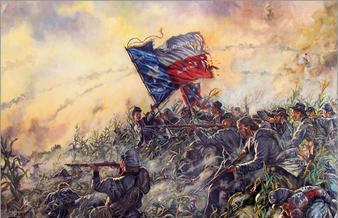 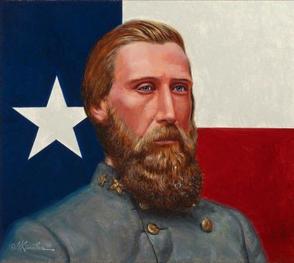 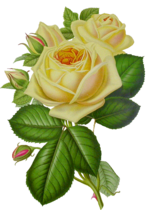