Banner of the 26th Texas Cavalry

Pictured is the flag of the 26th Texas Cavalry of which President Lyndon B. Johnson's ancestor fought. It is owned by the Texas Division United Daughters of the Confederacy and is housed at the Texas Civil War Museum, Fort Worth. Photo courtesy of LBJ State Park & Historic Site, Stonewall, Texas. 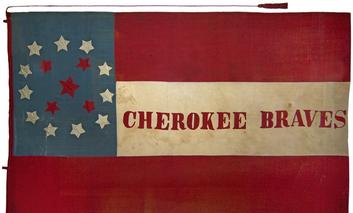 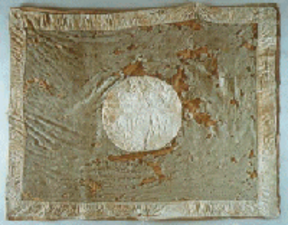 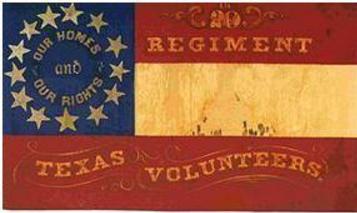 Banner of the 6th Texas Cavalry

This unique flag features a large red star, with 11 smaller stars contained within its points. In addition, there is a shield in the white bar. The shield features a yellow star and the word "TEXAS." It is unknown which Texas units utilized this Battle Flag. This flag is currently undergoing conservation.

This Flag was used by the 6th Texas Infantry and 15th Texas Cavalry (Dismounted), which served in Granbury's Texas Brigade of the Army of Tennessee. This flag is a variant of the Hardee Pattern Battle Flags used by the division of Irish-born General Patrick Cleburne throughout the war. Inside the white disc is a large red star, around which is spelled "TEXAS." This flag is currently undergoing conservation. ​ 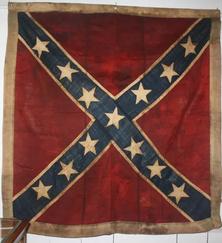 Flag of the Army of Northern Virginia

The most recognized flag of the CSA!  The flag's stars represented the number of states in the Confederacy. The distance between the stars decreased as the number of states increased, reaching thirteen when the secessionist factions of Kentucky and Missouri joined in late 1861. The Army of Northern Virginia battle flag assumed a prominent place post-war when it was adopted as the copyrighted emblem of the United Confederate Veterans. Its continued use by the Southern Army's post-war veterans groups, the United Confederate Veterans (U.C.V.) and the later Sons of Confederate Veterans, (S.C.V.), and elements of the design by related similar female descendents organizations of the United Daughters of the Confederacy, (U.D.C.), led to the assumption that it was, as it has been termed, "the soldier's flag" or "the Confederate battle flag". 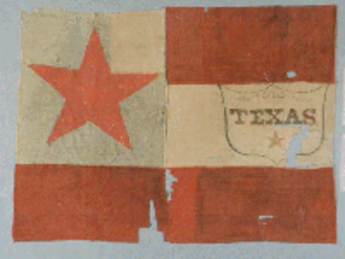 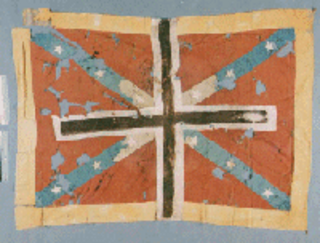 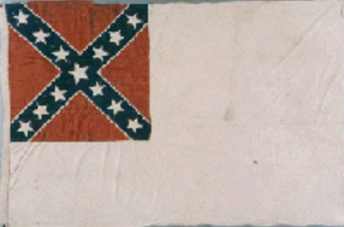 Flag of the Army of Trans-Mississippi

The Army of the Trans-Mississippi was a major Confederate army under the Department of the Trans-Mississippi during the American Civil War. It was the last major Confederate command to surrender, submitting on May 26, 1865, exactly one month after General Johnston had surrendered in the eastern United States. According to family stories, these flags were made in France, and due to a miss translation, the colors were reversed.

Banner's of the Texas Brigade

This Texas Flag was carried by the 1st Texas Infantry into the Cornfield at Sharpsburg. After 20 minutes of savage fighting, 82.3% of the regiment was dead or wounded, the highest casualty rate suffered by any unit during the war. After seven color-bearers were killed carrying the flag, it was found on the field after the battle, surrounded by dead Texans. Returned to Texas by the Federal Government in 1905, it is currently undergoing conservation by the State Historical Archives in Austin. 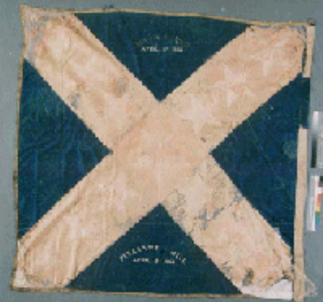 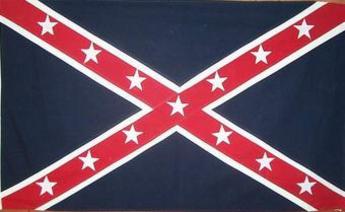 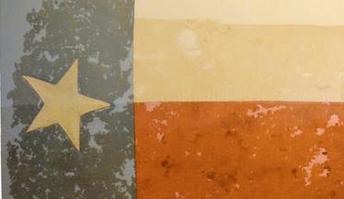 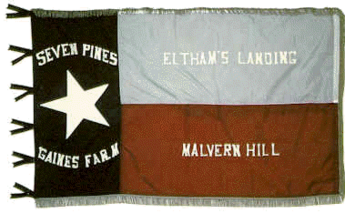 This flag was probably used by elements of Walker's Texas Division. It features the reversed colors which were the distinctive features of the battle flag designed by Lt. General Richard Taylor. It displays battle honors for the battles of Mansfield and Pleasant Hill, in which the Division played a significant role. This large (6' x 6') silk flag is currently undergoing conservation.
​

This unique Battle Flag features a black cross superimposed over the Battle Flag. The significance of this feature is not known. This flag lies folded up in a box in the Archives, waiting for conservation. Due to its delicate nature, it can only be handled by a skilled conservationist without damaging it.

This is a famed flag belonging to the Texas Patriots serving in the Army of Northern Virginia. The original flag (see image) has significant damage resulting in almost a square flag. However, after extensive research, what’s barely visible on the original flag (and stated in the flag’s description) is the inclusion of 2 other battle honors on this historic flag: Eltham’s Landing and Malvern Hill. Of note, both of these battle honors are painted on the flag in gold, but Eltham’s Landing is bordered by red paint and Malvern Hill is bordered in green.

First National Flag of the Confederacy, 1861

​ This large (8-1/2' x 12') flag is typical of the type of flag used in civil or government service. It is a slight variant from the normal pattern in that one of the stars is centrally located. Most 1st National flags made in Texas featured this unique star. This particular flag lies folded in a box in the Texas State Archives and funds are needed for its conservation.

Second National Flag of the Confederacy, 1863

​ This Second National Pattern Flag was used by the 33rd Texas Cavalry, which served primarily in South Texas along the Rio Grande River. One of its officers was Santos Benevides, who became the unit's colonel and was the highest-ranking Hispanic officer to attain a field command in the Confederate service 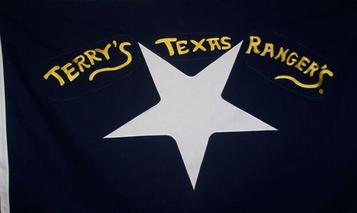 The flag of the Alamo City Guards. Donated by Mrs. O. M. Burt; restoration assisted by the Sons of Confederate Veterans. Image courtesy of Ernesto Rodriguez, Alamo assistant curator. The flag described by Edgar was donated to the Alamo by his daughter in the early twentieth century and restored in 2006 by Textile Preservation Associations. The field was always thought to have originally been blue; however, conservators determined it had actually been cream colored with a salmon colored star in the center. The Latin motto on the flag translates to "Let justice be done though the heavens should fall". 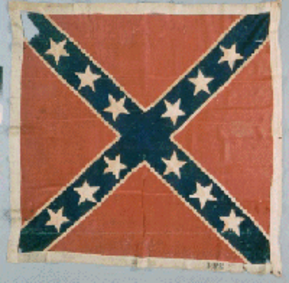 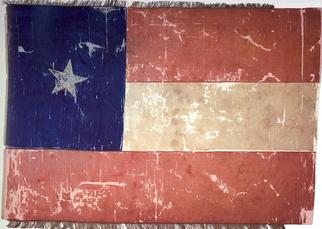 ​ When Texas delegates voted to secede from the Union in February 1861, a "Committee of Safety" was organized to seize all federal property in the state, especially the Federal Arsenal in San Antonio, and the Alamo.

When the Texas Brigade first organized, they adopted this flag for their unit. 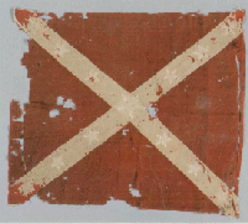 The 8th Texas Cavalry, (1861–1865), popularly known as Terry's Texas Rangers, was a regiment of Texas volunteers for the Confederate States Army assembled by Colonel Benjamin Franklin Terry in August 1861. ... In four years of service, Terry's Texas Rangers fought in about 275 engagements in seven states.​ 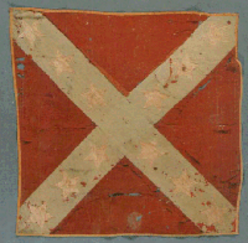 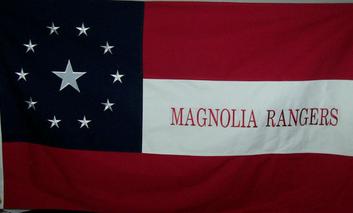 ​​This flag was found with the First Texas Lone Star Flag in the cornfield at Sharpsburg. It features a tear that was repaired with a woven lock of hair from a Union Zouave killed during the Battle of Second Manassas. It is made of cotton and was designed to replace previous editions made of silk that were too fragile for field use. This flag is currently undergoing conservation.

This flag was flown by Company G, of the 16th Texas. It is not known whether the regiment was the 16th Texas Cavalry or the 16th Texas Infantry Regiment. Both units served in Walker's Texas Division. Its lack of a white border along the cross is typical of Trans-Mississippi Battle Flag Variants. 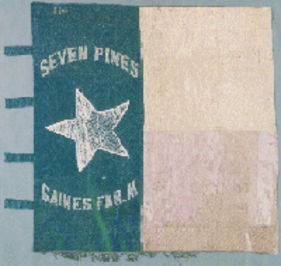 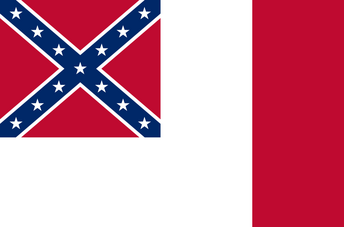 The Twentieth Texas Infantry was composed mainly of middle-aged men and commanded by Colonel Henry M. Elmore. It was part of the District of Texas, New Mexico, and Arizona, also known as the Third Corps under General John B. Magruder. Their main purpose was to guard the Sabine River and to protect the city of Galveston, Texas. They saw little action until the Battle of Galveston in January 1863, in which they served with distinction, for which their action was commended by Confederate President Jefferson Davis.

The unit was part of the famous Texas Brigade. The regiment fought at Eltham's Landing, Seven Pines, Gaines's Mill, Second Bull Run, South Mountain, Antietam, and Fredericksburg in 1862. It fought at Gettysburg and Chickamauga in 1863 and the Wilderness, Spotsylvania, Cold Harbor, and the Siege of Petersburg in 1864. The regiment surrendered to Federal forces on 9 April 1865 after the Battle of Appomattox Court House. The flag was made of expensive materials, such as silk and a stiff wire fringe. The fringe may have been gilt or old in color. Like most Texas flags of the era, the star is tilted on its axis. 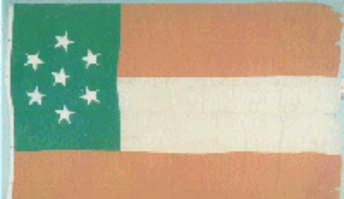 Third National Flag of the Confederacy, 1865

Third National Flag was adopted on March 4, 1865, the design of the Confederate national flag was altered because its white field could be mistaken for a flag of truce or surrender. The new pattern, featured a vertical red bar added to the outer edge.  Because the war ended several weeks after this pattern was adopted it was never given the chance to be used.