Since 1896, the SCV is still preserving the true history of the southern cause and emulate the virtues of the Confederate Soldier. Membership in the Sons of Confederate Veterans is open to all male descendants of any veteran who served honorably in the Confederate armed forces. Membership can be obtained through either direct or collateral family lines and kinship to a veteran must be documented genealogically. The minimum age for full membership is 12, but there is no minimum for Cadet membership. 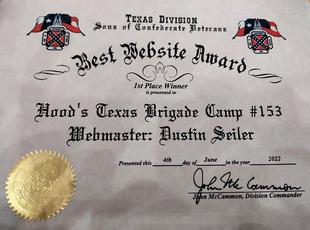 We cordially like to invite guest speakers to give their programs at our camp monthly meetings for the months of January to October of 2023. Please contact our Camp Lt. Commander: Raymond B. Reeves, for scheduling and availability. Please note - SCV Hood's Texas Brigade, Camp #153 is listed as a Non-Political 501(c)3 Tax Exempt Organization, and further doesn't accept program topics of current political or endorsement of candidates of public office, nor promulgation of a position on any pending legislation not directly affecting our southern heritage.

WE NEED YOUR SUPPORT!

Our shared southern heritage and history are a record of who and what we are. Sadly, though, most times we lose these treasures, not by fire, flood, or simple neglect; but to willful destruction by those that wish to perpetuate a false narrative. History is not something obscure or unimportant.  As Sons of Confederate Veterans, our cause is rooted in the virtues of the southern soldier - honor, integrity, righteousness, faith, and freedom. We serve to commemorate and preserve the memory of the Confederate soldiers that fought to defend their homes during the War of Northern Aggression of 1861-1865 and are dedicated to ensuring the true history, flags, & sacred symbols of the Confederacy are preserved. To never allow the ravages of an era that would see them canceled and forgotten.

2nd THURSDAY OF THE MONTH

For every qualified purchase you make, Amazon.com will donate .5% to the camp. Proceeds go to future projects and the continued efforts of our camp. All links here will take you directly to smile.amazon.com in support of SCV Hood's Texas Brigade, Camp #153 so you won’t have to search for our charity among other SCV Camps.

The SCV Hood's Texas Brigade, Camp #153 is a Non-Political 501(c)3 Tax Exempt organization dedicated to the preservation of the true history of the Confederate States of America & the service of the Southern Soldiers, Marines & Sailors. Donations will be used to support our community outreach, living history & education programs, JROTC Leadership Awards & Project Funding. 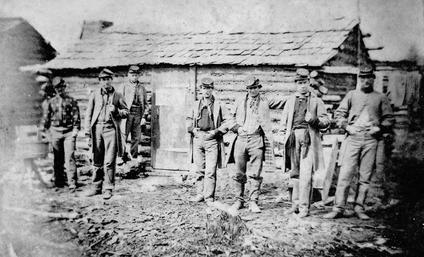 THE CHARGE OF THE SONS OF CONFEDERATE VETERANS
"To you, Sons of Confederate Veterans, we will commit the vindication of the cause for which we fought. To your strength will be given the defense of the Confederate soldier’s good name, the guardianship of his history, the emulation of his virtues, the perpetuation of those principles which he loved and which you love also, and those ideals which made him glorious and which you also cherish.  Remember, it is your duty to see that the true history of the south is presented to future generations.”

[IN THE PRIVATE PARTY ROOM]

Our lectures are free and always open to the public. Guest Speakers & Programs vary from month to month, please see our camps' event calendar for details.

Meetings are called to order at 7:00 PM

YOUR INVITED TO JOIN US!

"The enemy never sees the backs of my Texans!"

-General Robert E. Lee: The Battle of the Wilderness, 1864 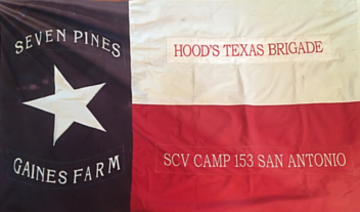