"For his unswerving leadership as Camp Commander and contributions to the success of Hood's Texas Brigade, Camp #153 as the Distinguished Camp of the Texas Division, in 2020."

Recipients of the Award

Purpose: The Texas Gold Star Award is awarded to membership – regardless of their level or time of service - of Hood's Texas Brigade, Camp #153, for OUTSTANDING AND EXEMPLARY patriotic achievement and community service of statewide or local importance to the local San Antonio community and/or to his SCV Camp. It is so named after the original nine Texas Gold Stars that were presented to the Texas Brigade under the command of General John Bell Hood.

The Texas Gold Star Award will be awarded only at the camp level and is considered a separate award from the Texas Division and or National Awards.

Number of Awards: At least one (1), per year. If the Camp's Award Committee feels that more than one award is to be presented, approval may be granted by the Camp's Executive Committee. The award will be presented in the form of a military-style medal and accompanying certificate.

Eligibility: Active and regular participation in the local Hood's Texas Brigade, Camp #153, Sons of Confederate Veterans events and/or meetings, as well as for service above and beyond that which would normally be expected of camp members or Friends of the SCV. It is not mandatory that a nominee be a recipient of either a Texas Division Gold, Silver, or Bronze Cross for Meritorious Service.

Selection Process: Any member - regardless of their level or time of service - of Hood's Texas Brigade, Camp #153, may be nominated by an active member of the camp. Nominations must be sent in writing to the Camp's Award Committee, who shall review the nominations and submit its recommendations to the camp at the May meeting for the camp to vote on the recipient. Voting will be done by secret ballot of all members in attendance. The award will be presented along with the Division awards in July. 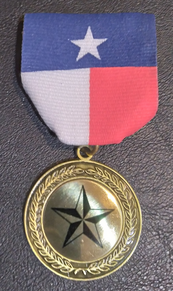