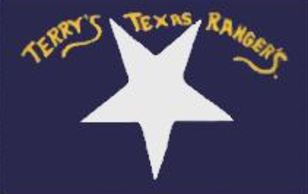 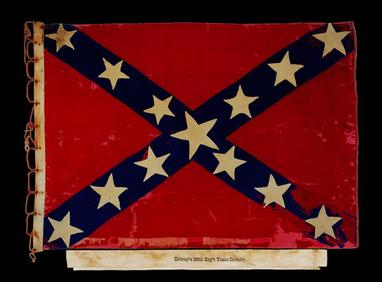 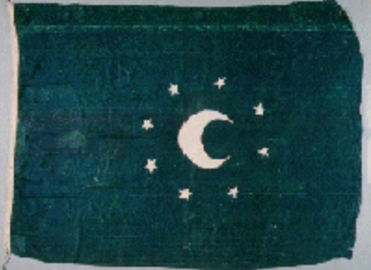 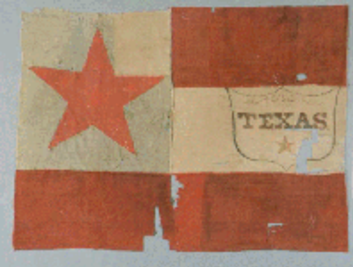 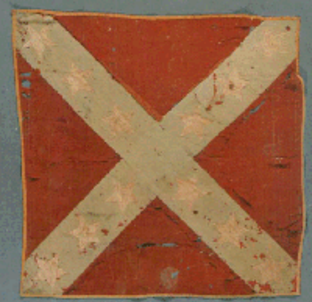 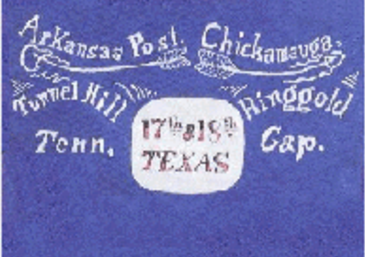 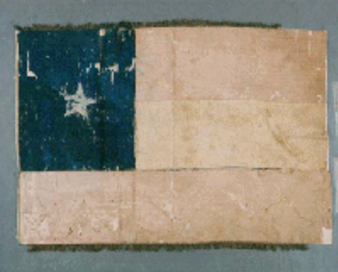 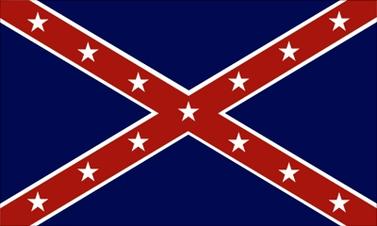 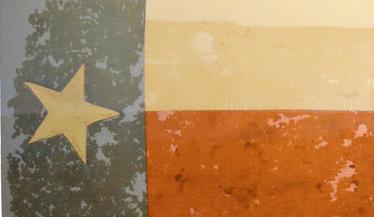 
This large (8-1/2' x 12') flag is typical of the type of flag used in civil or government service. It is a slight variant from the normal pattern in that one of the stars is centrally located. Most 1st National flags made in Texas featured this unique star. This particular flag lies folded in a box in the Texas State Archives and funds are needed for its conservation.


This Texas Flag was carried by the 1st Texas Infantry into the Cornfield at Sharpsburg. After 20 minutes of savage fighting, 82.3% of the regiment was dead or wounded, the highest casualty rate suffered by any unit during the war. After seven color-bearers were killed carrying the flag, it was found on the field after the battle, surrounded by dead Texans. Returned to Texas by the Federal Government in 1905, it is currently undergoing conservation.


This flag was flown by Company G, of the 16th Texas. It is not known whether the regiment was the 16th Texas Cavalry or the 16th Texas Infantry Regiment. Both units served in Walker's Texas Division. Its lack of a white border along the cross is typical of Trans-Mississippi Battle Flag Variants.

This unique Battle Flag features a black cross superimposed over the Battle Flag. The significance of this feature is not known. This flag lies folded up in a box in the Archives, waiting for conservation. Due to its delicate nature, it can only be handled by a skilled conservationist without damaging it.


This Second National Pattern Flag was used by the 33rd Texas Cavalry, which served primarily in South Texas along the Rio Grande River. One of its officers was Santos Benevides, who became the unit's colonel and was the highest-ranking Hispanic officer to attain a field command in the Confederate service

The Secession Flag of South Carolina is one of several flags of the other Confederate States that have found its way to the Texas State Library and Archives. The crescent moon was a symbol popular in the South, and especially in the states of South Carolina and Louisiana.

This flag was found with the First Texas Lone Star Flag in the cornfield at Sharpsburg. It features a tear that was repaired with a woven lock of hair from a Union Zouave killed during the Battle of Second Manassas. It is made of cotton and was designed to replace previous editions made of silk that were too fragile for field use. This flag is currently undergoing conservation.


This flag was probably used by elements of Walker's Texas Division. It features the reversed colors which were the distinctive features of the battle flag designed by Lt. General Richard Taylor. It displays battle honors for the battles of Mansfield and Pleasant Hill, in which the Division played a significant role. This large (6' x 6') silk flag is currently undergoing conservation.

There is little information available about this flag. The flag was made of expensive materials, such as silk and a stiff wire fringe. The fringe may have been gilt or old in color. Like most Texas flags of the era, the star is tilted on its axis.


This unique flag features a large red star, with 11 smaller stars contained within its points. In addition, there is a shield in the white bar. The shield features a yellow star and the word "TEXAS." It is unknown which Texas units utilized this Battle Flag. This flag is currently undergoing conservation.


This Battle Flag was the last flag used by the 1st Texas Infantry. It was captured at Appomattox, Virginia on April 8, 1865, one day before the surrender of General Lee. It is the final variant of the Army of Northern Virginia Pattern, with the white border on all four sides of the flag. Returned to Texas in 1905, it is currently undergoing conservation.

This Flag was used by the 6th Texas Infantry and 15th Texas Cavalry (Dismounted), which served in Granbury's Texas Brigade of the Army of Tennessee. This flag is a variant of the Hardee Pattern Battle Flags used by the division of Irish-born General Patrick Cleburne throughout the war. Inside the white disc is a large red star, around which is spelled "TEXAS." This flag is currently undergoing conservation.

​Pictured is the flag of the 26th Texas Cavalry of which President Lyndon B. Johnson's ancestor fought. It is owned by the Texas Division United Daughters of the Confederacy and is housed at the Texas Civil War Museum, Fort Worth. Photo courtesy of LBJ State Park & Historic Site, Stonewall, Texas.

The 8th Texas Cavalry, (1861–1865), popularly known as Terry's Texas Rangers, was a regiment of Texas volunteers for the Confederate States Army assembled by Colonel Benjamin Franklin Terry in August 1861. ... In four years of service, Terry's Texas Rangers fought in about 275 engagements in seven states.

​In November of 1863, the 17th and 18th Texas received their new flannel Hardee flags inscribed with the battle honors of the previous campaigns: Arkansas Post, Chickamauga, Tunnel Hill, and Ringgold Gap. During the Atlanta Campaign, the units participated in some of the hardest fightings of the war. This is the flag of the combined 17th and 18th Texas, it was not issued to the regiment until sometime in early 1864 when the rest of Cleburne's Division got new battle flags.

The Secession Flag of Texas. When Texas delegates voted to secede from the Union in February 1861, a "Committee of Safety" was organized to seize all federal property in the state, especially the federal arsenal in San Antonio.


The Twentieth Texas Infantry was composed mainly of middle-aged men and commanded by Colonel Henry M. Elmore. It was part of the District of Texas, New Mexico, and Arizona, also known as the Third Corps under General John B. Magruder. Their main purpose was to guard the Sabine River and to protect the city of Galveston, Texas. They saw little action until the Battle of Galveston in January 1863, in which they served with distinction, for which their action was commended by Confederate President Jefferson Davis. 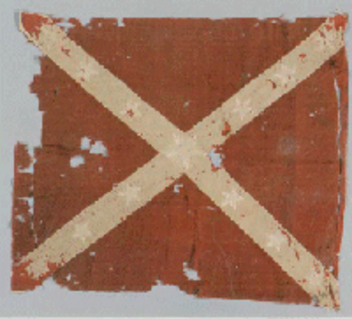 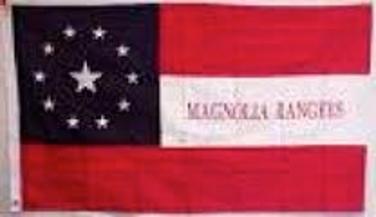 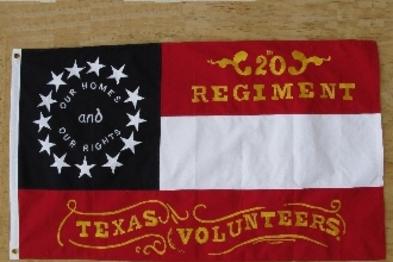 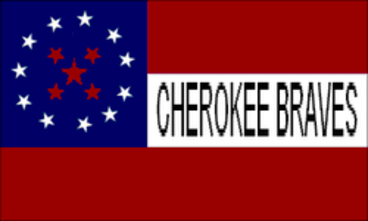 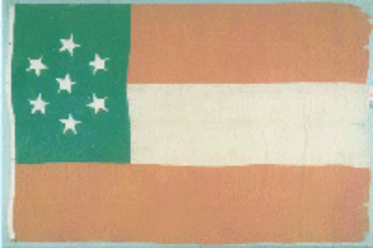 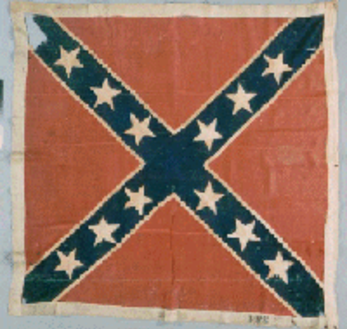 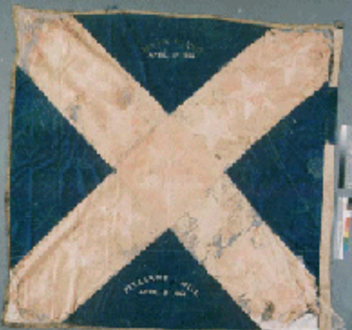 MODIFICATIONS AND USE OF THE FLAG
The flag should never be modified in any way. It should be displayed as originally designed without alteration.
The basic flag design may be incorporated into the logo of an organization only if it is done in such a manner as to hold the Confederate States of America in the highest respect.
The flag, or design elements of the flag, should never be used to associate The South or the Confederate States of America with any other political or social agenda.

Examples of ACCEPTABLE incorporation into a design are:
a. Sons of Confederate Veterans logo
b. United Daughters of The Confederacy logo
c. State flags

Examples of UNACCEPTABLE incorporation into a design are:
a. Images of the Confederate flag, or design elements of the flag, combined with images of skulls, motorcycles, or other objects that detract from the honor and respect due the flag.

Examples of UNACCEPTABLE use of the flag:
a. The Confederate flag with images of skulls, motorcycles, or any other object.
b. The Confederate flag incorporated into any article of clothing. An exception to this is neck ties and lapel pins that have traditionally been used to respectfully display patriotic symbols.

Examples of ACCEPTABLE use of the flag image:
a. Bunting or similar material used for patriotic decoration which includes design elements of the Confederate flag, or images of the flag such that it is clearly not being used as a flag. Examples would be the flag: depicted furled, on a staff, carried in battle, in a memorial arrangement. 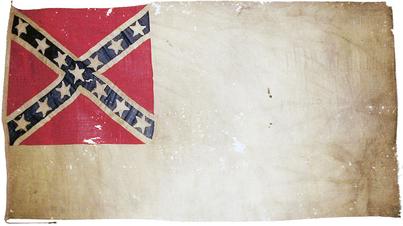 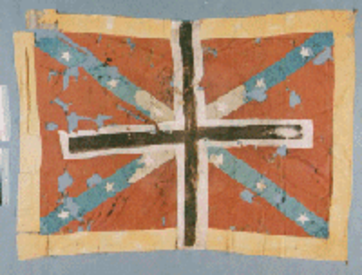 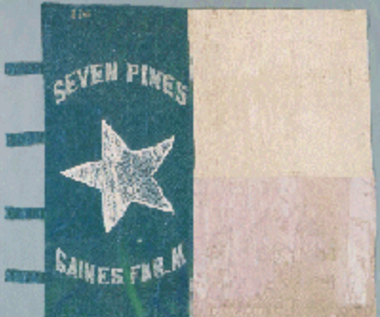 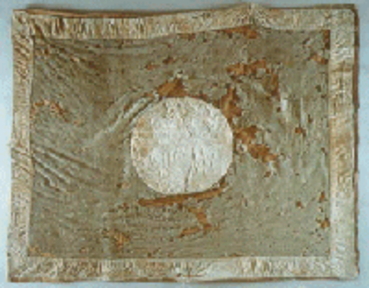